Wouldn’t it be nice if the stress of conflicted copies in OneDrive for Business could be resolved by an external entity – if one could dispatch a kind of conflict resolution executive, if you will.

“In my business, you prepare for the unexpected.”

“And what business is that?”

“I help people with problems.”

The above is a quote from Ian Fleming’s classic spy novel Licence to Kill and has more relevance to the world of Microsoft than you might first expect. In fact, this is not the first time the world’s greatest spy has been mentioned in conjunction with the world’s most widely used document creation and collaboration platform, SharePoint.

Back in 2014, I wrote a post detailing the issues a cohort of Mr Bond’s most dangerous enemies may encounter without the ability to co-author documents in SharePoint. Since the cronies waste too much of their time trying to upload conflicted content to SharePoint, Mr Bond is able to break free and end their wicked plans. As I pointed out, arch villains have a terrible habit of not using their time wisely, reinforcing the should-be arch-villain’s mantra: don’t speak, just do. It is that notion that we will be exploring today in terms of using Microsoft’s OneDrive for Business sync problems and conflict management.

Mobile working allows us to stay productive regardless of our location – if an internet connection isn’t a necessity, you can work deep underground or at 39,000 feet with relative ease. Removing the boundaries of where we have to be to get work done is, of course, a big step forward in terms of productivity. In terms of conflict management, however, it can prove to be a problem.

The conflict in question is simultaneously updating files both locally and in the Cloud, and can substantially disrupt working within OneDrive for Business. For changes made to either one or the other, this is not a problem: the document is updated each time an individual makes amendments, and users are able to view different versions to see how the document has changed over time. It is not until changes are made at the same time that issues start to arise.

Let’s say – being the hard-working employee that you are – that you are making changes to a document whilst on your commute to work. Unknown to you, however, a colleague is also editing the document within SharePoint at the same time. When you arrive at your office, having both made your own changes, OneDrive for Business realises there are two conflicting versions of the document and proceeds to alert you to the problem.

In this new age of collaboration, large organisations, with hundreds of employees – each of whom will access hundreds of documents – see document changes happen fast and frequently. As such, conflicts can be the cause of a lot of confusion: users can easily lose track of their own content within documents, confusing their own changes with a colleague’s edits and so on.

Do you expect me to talk?

While it’s great that OneDrive for Business notifies you of these problems, that’s about as far as its assistance in the matter goes. I don’t mean to draw too many similarities between OneDrive for Business and arch villains, but this is where their paths cross; whilst the platform speaks about the problem, it actually does very little to provide a solution. In reality, this can be quite counterproductive; if we are presented with a myriad of problems with no visible solution, then the most common response is panic. As a result, users are likely to make even more mistakes – adding fuel to the fire rather than fetching the nearest bucket of water.

When under pressure, rushed or hurried with work, the biggest risk to your content is you. Suddenly, you might forget the changes you made to a document, confuse other people’s changes with your own, or save the wrong document by accident and overwrite the correct one. With countless alerts and pop-ups from OneDrive for Business to the tune of “you shouldn’t have done this!”, “uh oh, this is really bad!” and “you need to fix this right now!” this is only going to pile on the pressure. Instead, users need solutions that are clear, defined and informative. The management part of ‘conflict management’ is just as important as the conflict.

For your eyes only

Easier365, from Digilink, makes use of database-driven conflict management to allow users to deal with conflicts at their own pace. Easier365 identifies that multiple, simultaneous changes have been made to a file – updated online in SharePoint and offline locally. Let’s return to our hypothetical scenario of you on your commute to the office; when you arrive, the software detects that both versions of the file have been updated, and takes the following steps:

This ensures that no changes to either file get lost, and you now have control over your conflicts and how you want to deal with them. Even better than that, all the changes – whether they were made in SharePoint or locally – are now at your disposal even offline; meaning they’re not going anywhere and you don’t have to rush into anything. You then have the following 5 options when dealing with your conflicted file(s). 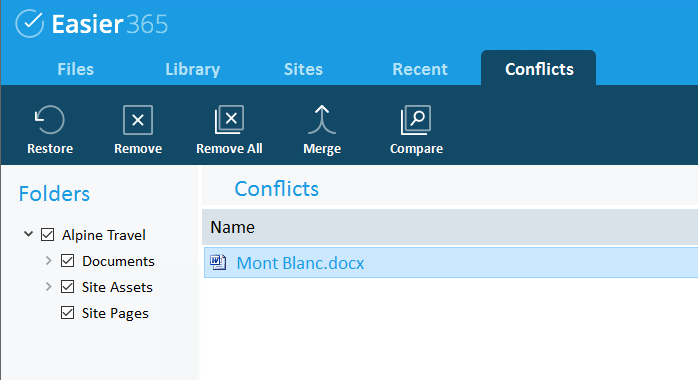 If you don’t want the newly downloaded SharePoint file in your local folder, the ‘Restore’ button will restore the file your original local document back into the offline folder. It will also upload your version into SharePoint and cause the original SharePoint file to become ‘versioned’.

If your changes are negligible or turn out to be of no importance and you would prefer the downloaded version to remain, the ‘Remove’ button will tell Easier365 to ignore the conflict. This means the downloaded file with become the prevailing file, overwriting your previous changes.

This will combine the downloaded file and your local file into one document, and will be stored in the local folder and uploaded to SharePoint. This is usually the case if you and a colleague are working on separate areas of a document, and know that your changes will not overlap.

‘Compare’ works with Word’s track changes feature – displaying both sets of changes – so you can accept and reject changes made by all users as you wish. Once you save this new document, it will become the new local version and will be uploaded to SharePoint.

Your own conflict resolution executive

Easier365 provides you with a wealth of options for dealing with OneDrive for Business sync problems and conflicts. Database-driven conflict management gives users the breathing room that OneDrive for Business neglects – all conflicted copies are available locally and offline, so there are no time constraints on resolving changes. Plus, if at any point you change your mind with the conflicts you do resolve, the original files will be retained in your local versions and the original file will be located in SharePoint version history, so there’s no pressure on getting it right the first time.

To learn more about conflict management, OneDrive for Business sync problems and Easier365, contact us today. If you’d rather dive straight in, start your fully featured free trial today.